Myanmar is situated at the transition zone between the three bio-geographic regions: in the North, Indochina, the Indian sub-continent; and Eurasia; in the South, Taninthayi forests cover the Northern section of the transition between Indochina and Sundaic ecological zones. These transitional zones produce unique and diverse species assemblages. The most intact lowland Sundaic forests are found in Myanmar, along with patchy but regionally significant areas of dry deciduous forest. Birds that migrate on both the Central Asian and East Asian Flyways rest at globally important wetlands in the country. Myanmar contains almost 10% of global turtle and tortoise diversity, including seven endemic species. Some regions and areas are relatively understudied, and surveys continue to identify new endemic species and range extensions of globally threatened species. Ongoing surveys are also developing a better understanding of the distribution and status of these species. 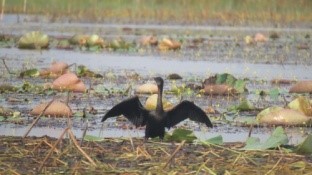